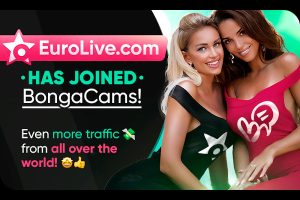 BongaCams said the addition of EuroLive.com “marks a new milestone in website development and opens lots of additional opportunities not only for the members, but also for webcam models, studios, and webmasters across the globe.”

“When two websites of such a scale join their forces, it opens inspiring perspectives,” BongaCams said in its announcement, noting that adding EuroLive.com to BongaCams will mean “thousands of new models, lots of additional features and bonuses, higher traffic and (improved) conversion rates.”

Launched in 2006, EuroLive.com is particularly popular with French-speaking audiences, BongaCams explained in the announcement.

The site’s design was recently updated, along with upgrades to its functionality, making it more user-friendly and improving its accessibility on mobile devices. BongaCams said in its announcement that “numerous useful features and bonuses have been introduced, while the number of models online has increased up to several thousand.” At the same time, the price of tokens has dropped considerably, making paid features accessible to more of the site’s members.

Improvements to the site’s interface benefit the platform’s models, as well, incorporating features previously available only on BongaCams itself.

In the announcement, BongaCams also observed that the company is celebrating its 10th anniversary, a major milestone for the company. BongaCams representatives said as it moves into its eleventh year of operation, the company is “focused on ongoing development, creating the most comfortable conditions for members and offering the models the best opportunities for gaining a great income.”

BongaCams also touted the networks’ popularity – and observed that with the addition of EuroLive.com, its audience will be getting larger still.

“According to Alexa’s global ranking, BongaCams is ranked #33 among all internet-sources worldwide, being the most visited webcam site,” BongaCams said in its announcement. “With EuroLive.com joining, BongaCams audience will become significantly bigger, allowing a huge number of models and members from different countries to communicate on one platform!”

For more information, please visit BongaCams.com and EuroLive.com. For information on promoting the BongaCams network as an affiliate advertiser, go to BongaCash.com.

No comments to show.